The Samsung Gear S2 Classic 18K Rose Gold and Platinum variants have arrived in India, a few months after the smartwatch had gotten launched in the country. The two are accompanied by a White version of the regular model.

The new additions bring the total number of versions available in India to 5. Both the Samsung Gear S2 Classic 18K Rose Gold and Platinum units are priced at Rs 34900, while the new White variant costs Rs 24300. The brand has also released a number of games, apps and dial faces for the smartwatch in the nation. 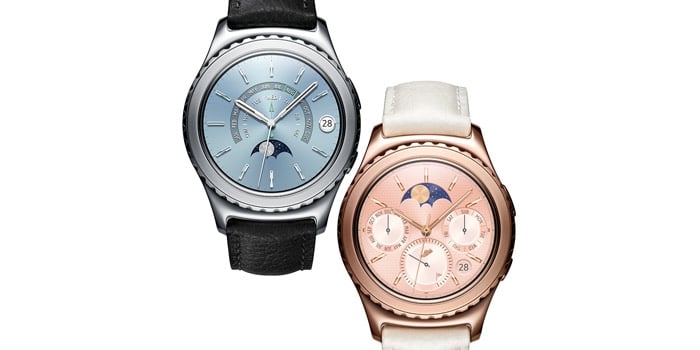 These new games include the likes of Hextris, Hangman and Vroom Rider. In a statement, Samsung said that the fresh entries come with support for the rotating bezel of the wearable, meaning it can be used as a game controller. The brand has also added a range of dial faces to its catalogue such as animated Peanuts art.

There are also more functional faces which can signal information like the weather, health goals, reminders, moon phases and notifications within one screen. Moving on to apps, users of the Gear S2 can now download the Uber for Gear tool in order to locate and request cabs. They can also track their sleep through G’Night, take notes through My Notes and browse YouTube via Xenozu.

A rapid summary of the top specifications of the Samsung Gear S2:

You can buy the Samsung Gear S2 via offline stores across India and Flipkart.