The OnePlus 5 has finally gotten an official launch date after months of leaks, with the brand confirming that the handset will come out on June 20 internationally. The flagship device will then be unveiled in India on June 22 at an event in Mumbai.

OnePlus’ India site now has a dedicated page for the event which features the phrase ‘Focus on what matters.’ The upcoming smartphone is widely expected to sport iPhone 7-like dual cameras, so this could be a reference to a bokeh effect which allows users to refocus the subject of a shot and blur out the background.

OnePlus is looking to drum up some excitement for the handset by launching a contest in which 5 people will get the phone for free. Interested participants will have to set an SMS alert to watch the handset’s launch live. The alert has to be set by June 20 and the winners will be announced via Facebook on June 30. 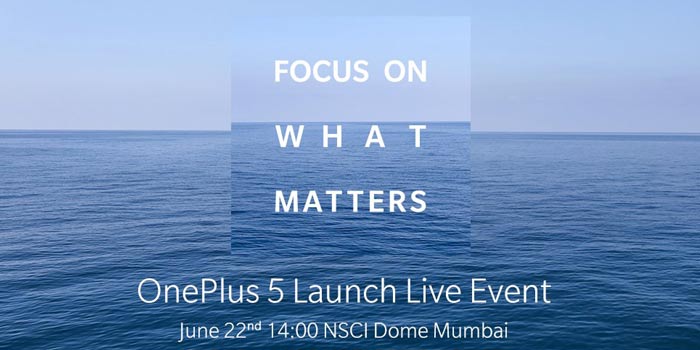 Other than the bokeh effect, the OnePlus 5’s twin shooters will probably consist of one color and one black and white lens. This would allow it to capture a greater level of detail which in turn will likely result in clearer photos. Specifications aren’t certain yet, but there will probably be at least one 23MP unit on the back and 16MP one on the front.

Other possible specs include Android 7.1 Nougat, 6GB or 8GB of RAM, a Snapdragon 835 processor, a 5.5-inch QHD screen, 64GB and 128GB storage options, a 7mm thickness, and a 3000mAh battery. You can sign up for the contest here and watch OnePlus’ India livestream at 2 pm on June 22.