Where’s the OnePlus 4? The developers are skipping it and jumping directly to OnePlus 5 since the number 4 is considered unlucky in China. Those who’ve been following the news closely will already know this. Now here’s a chance for folks who love clicking photos on their phones to win a OnePlus 5, and lay hands on it before anyone else.

The process is pretty straightforward. Start by following @oneplustech on Instagram so you can fill out the required form on this page. Lastly, submit any three of your best pictures shot through your phone that you’ve uploaded on the Instagram. It doesn’t matter which device you used to click the photo as long as it was a handset.

OnePlus will then get in touch with 10 applicants who’ve uploaded the best pictures and send them the upcoming smartphone for keeps. Rumors about the device have been gaining steam over the past few weeks, leading everyone to believe that the OnePlus 5 will be launched very soon, possible by June 2017. 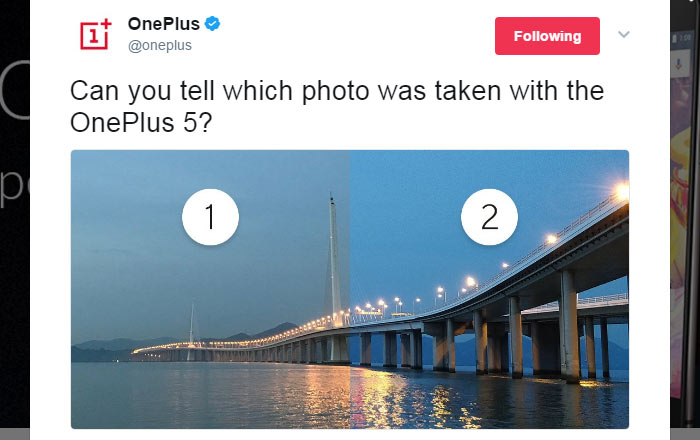 The Chinese company has been teasing the handset’s capabilities on social media. It recently uploaded two comparison shots and asked audiences to guess which one was taken using the OnePlus 5. CEO Pete Lau has confirmed that the device will have Qualcomm’s latest Snapdragon 835 processor.

The upcoming phone is already expected to perform at par with (if not better than) other big brand flagships thanks to OnePlus’ partnership with DxO, the French company famous for its image processing software and DxOMark photo quality rating website. A dual camera setup is said to be on the cards.

In terms of other key specifications, the OnePlus 5 may come in 6GB RAM/64GB storage and 8GB RAM/128GB memory variants. It could have a display of at least 5.5 inches and run Android Nougat. It will be painted in black, gold, red and a color ‘inspired by a unicorn,’ says OnePlus.