Motorola’s brought 3 new Moto Mods to India namely the JBL SoundBoost 2 Mod, GamePad Mod, and TurboPower Pack Mod. The 3 made its debut back in June 2017 alongside the Moto Z2 Play.

Motorola has also tied up with Rentmojo to offer its Moto Mods on rent starting from December 22. Leasing the accessories could be a solid idea for people who just want to try one out before making the leap to ownership. Plus, it’ll make the devices more affordable for individuals who just want to temporarily use it.

Anyone who wants to buy the 3 new Moto Mods can head to Flipkart, Motorola’s offline outlets, and other retail partners starting from December 16. The JBL SoundBoost 2 Mod is priced at Rs 6999, the GamePad Mod at Rs 6999, and the TurboPower Pack Mod at Rs 5999. 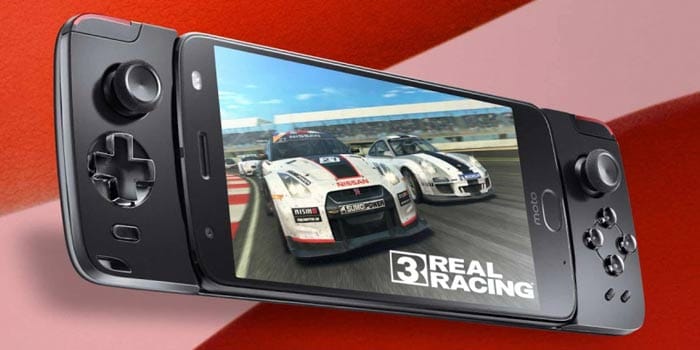 The JBL SoundBoost 2 Mod is an upgraded version of its predecessor, offering a stylish fabric back, kickstand, 10-hour battery life, and JBL stereo speakers. As for the GamePad Mod, it targets dedicated gamers who want to add some physical controls to their mobile gaming experience.

The GamePad Mod is a neat throwback to good old-fashioned handheld gaming consoles, offering up a D-pad, dual control sticks, and 4 tactile action buttons. Its 1035mAh battery promises 8 hours of power, plus the direct magnetic attachment means that users won’t have to deal with Bluetooth pairing or wireless input lag.

Finally, the TurboPower Pack Mod is a simple cover which features an impressive 3500mAh capacity. Owners will get up to 7 hours of fuel after just 15 minutes of charging. All 3 Moto Mods are compatible with any Moto Z series phones including the Moto Z, Moto Z Play, Moto Z Force, Moto Z2 Force Edition, and Moto Z2 Play.