The OnePlus 5T Star Wars Limited Edition has officially gotten launched in India, the same day The Last Jedi hits theatres. The phone’s already gone up for sale, but you’ll have to pay an extra Rs 1000 over the regular 8GB/128GB variant’s price to flaunt your fandom.

For Rs 38999, OnePlus is throwing in a free Kylo Ren-inspired case. The company’s actually warned that the OnePlus 5T Star Wars Limited Edition could show signs of scuffing with daily use, so it would be best to put the cover to good use. The handset’s specs remain the same as before, but it won’t be available in a 6GB/64GB option.

The design of the OnePlus 5T Star Wars Limited Edition is where it really stands out. The all-new Sandstone White back takes its inspiration from the planet Crait, while the flashy red alert slider takes its cues from the red Star Wars logo. 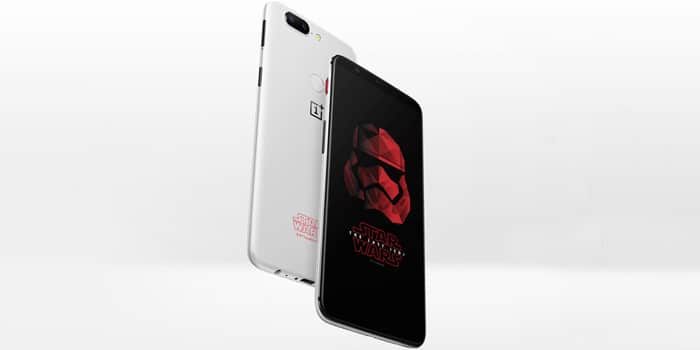 Plus, there are a number of Star Wars wallpapers inside, along with a black-white-red color scheme. OnePlus says it’s released the device now to celebrate its fourth anniversary in India. Special deals on its site include no cost EMI schemes, an extra Rs 2000 off upon trading any OnePlus phone, and a bonus Rs 1000 off on any other device.

OnePlus has also partnered with Axis Bank to grant its debit and credit card customers a Rs 1500 discount. Amazon India is offering an exchange scheme as well, in addition to 1008GB of Idea data, Rs 250 as Amazon Pay balance via the Prime Video app, Rs 500 in Kindle eBook credit, a year’s worth of Zomato Gold membership, and a 12-month Servify Damage Insurance scheme via Kotak 811.