Lenovo India has launched the much awaited Moto Z and Z Play along with Moto Mods in the country. The devices will be available exclusively on Flipkart and Amazon India from October 17. They are following the LG G5 in the list of locally available modular phones.

The add-on Moto Mods that are made available in India include a speaker, projector, zoom lens, power pack, and style shells. These are used to enhance the phone’s usability. Motorola says the Moto Z was designed to be razor thin in order for it to support the accessories without adding bulk. They are fitted to the gadget through magnetic connectors on its back surface. 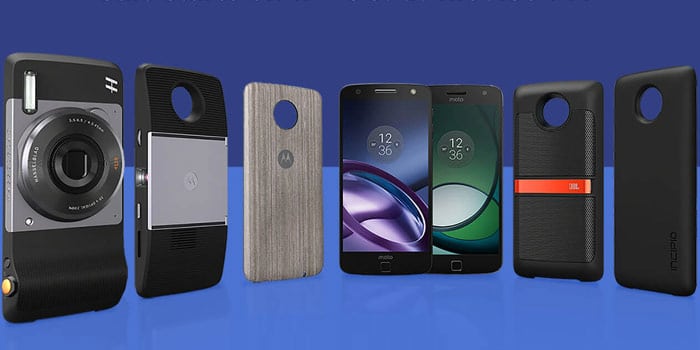 The JBL SoundBoost speaker module provides stereo sound and includes 10 hours of in-built battery life. It can also be used to execute calls and is available for Rs 5999 if bundled with the device. The Moto Insta-Share turns the device into a projector that runs videos and presentations on any flat surface. This mod will cost Rs 15999 if bought with the handset.

The Rs 4999 Incipio offGRID Power pack can charge your Moto Z for 20 additional hours. Users can click high quality close-up shots using the Hasselblad True Zoom thanks to 10x optical zoom. It is supplemented with a Xenon flash that illuminates images in low-light settings. The lens will set you back by Rs 14999.

Moto Mods also cover the physical appearance of the Moto Z. The Moto Style Shells transform the rear of the handset to suit your style. These covers are priced according to the material they use namely ballistic nylon and wood or leather.

The Moto Z Play was also launched in India along with the flagship device of the series. The two are different in terms of processors, RAM, storage, battery, and rear camera. The former has lesser of all of the aforementioned features except the main shooter and processor speed. It will be sold in black, silver, white, and gold color variants.

Here is a list of specifications for the Moto Z Play:

The Moto Z and Z Play will be available on Amazon and Flipkart for Rs 39999 and Rs 24999, respectively. The Moto Mods will also be listed on these websites.