The new iPad Air 2 as well as iPad mini 3 are now standing before us, even as Apple has announced these tablets to much fanfare. Both the slabs get the Touch ID fingerprint scanner, while the fresh storage options of the iPhone 6 (16GB, 64GB and 128GB) have also been brought into the tablet range.

First let us talk about the new iPad Air 2 which is the thinnest slate Apple has ever made. At 6.1mm and 0.96 pounds in weight, it’s even slimmer and lighter than its predecessor which is a pretty big deal.

The device houses a 9.7-inch Retina display with a resolution of 2048 x 1536 pixels, while its internals are highlighted by a new A8X 64-bit SoC which is said to be 40 percent faster than the A7 chipset. 10 hours of battery life is on offer, apart from upgraded cameras, fast Wi-Fi speeds and Apple Pay support.

The second iOS gadget that has been unveiled by the company today is the iPad mini 3 which still has a 7.9-inch display with a 1536 x 2048 pixel resolution. The design language on this tablet is a lot different than that on the Air 2, which is why it’s thickness and weight have not changed.

Another thing that has been retained is the Apple A7 64-bit processor which was unveiled last year with its M7 motion co-processor. And while the cameras too don’t see any upgrades, faster Wi-Fi and Apple Pay support will indeed manage to please some buyers. 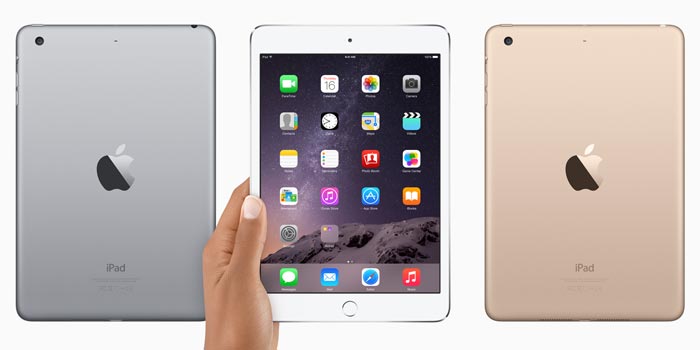