WhatsApp keeps updating itself pretty frequently, so there are a few features which occasionally slip through the cracks and go unnoticed for a long time. Three of these new additions have recently come to light via 2 separate reports.

However, individuals had to remember different symbols to set a certain font. WhatsApp’s system wasn’t intuitive and user-friendly as a result, with many people not even being aware of it. The new procedure is much simpler in comparison since all a person has to do is select the text, tap on the 3 dots symbol in the corner, and choose their preferred style. 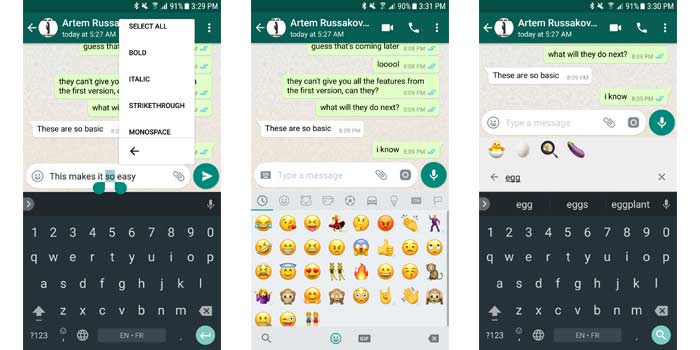 The second feature makes finding emojis much easier. WhatsApp’s text box now has a magnifying glass symbol which is located at the bottom left corner. Users can just tap on it to search for emoticons by inputting words like baby, angry or eggplant. Both the above tools can be accessed by downloading WhatsApp’s beta avatar via APKMirror.

As for the third feature, WhatsApp’s come up with a new Night Mode to help people make their photos brighter without using flash. It’s symbolized by a moon symbol and appears automatically in dim environments. It’s currently only available for iOS users who can update to the latest version of the app via the App Store.