The Canon EOS 1300D has been launched in India, with the company hoping to capture the attention of amateur photographers looking to buy their first DSLR. The entry-level camera is set to hit stores in April this year.

The Canon EOS 1300D can be bought in exchange of Rs 29995 for the body and EF-S 18-55 IS II lens. Interested buyers can also opt for an additional EF-S 55-250 IS II zoom lens bundle priced at Rs 38995. The previous model in the series came out 2 years ago. In that light, the new DSLR offers little in the way of big changes given that it looks pretty much the same and sports a similar set of tech specs. 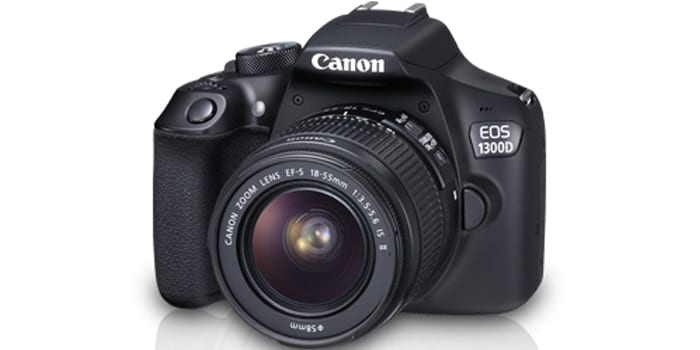 The headline-grabbing feature of the Canon offering is its Wi-Fi and NFC connectivity, something which the brand is putting a heavy emphasis on to enhance its social media appeal. The device pairs with smartphones through the company’s Camera Connect app. Users can transfer content wirelessly and remotely control the shooter.

Some of the aspects photographers can change through the application include aperture, shutter speed and ISO. Specs-wise, the 3-inch LCD screen of the EOS 1300D now ships with double the resolution of its predecessor at 920k dots. The brand has also equipped it with a much faster DIGIC 4+ processor.

Buyers of the Canon DSLR can look forward to shooting images through an 18MP APS-C CMOS sensor. The unit is apparently 25 times bigger than the sensors commonly found in handsets. The snapper boasts of a 100 – 6400 ISO range which can go up to 12800. Finally, the camera offers a 9-point autofocus system and 1080p video recording.