What a fortnight it has been for Xiaomi who has now emerged as the third largest smartphone vendor in the world! Samsung retains its position as the biggest force in these mobile wars of course, and Apple comes in second, according to a new IDC study. Lenovo actually tied with LG for the fourth place, both registering less than 0.1% difference in their market shares with regards to devices shipped out to customers.

For Xiaomi, third place may certainly sound good to the ears. It actually grabbed 5.3 percent of the market share in the smartphone arena, a figure which pales in comparison to Samsung’s 23.8 percent and Apple’s 12 percent pieces of the pie. You might also argue that these IDC results for the third quarter of 2014 still show the Chinese company enjoying more than 200 percent growth when pitted against its 2.1 percent share in the same time period of 2013. 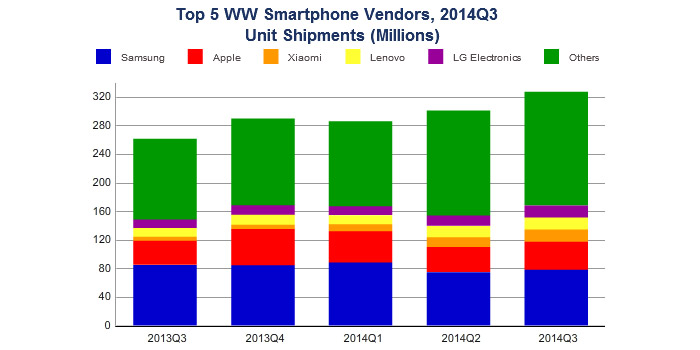 The leader in smartphone shipments has taken a hit and done worse as compared to its performance in the third quarter of last year. Back then, Samsung enjoyed a market share of 32.5 percent. The company’s losses may have to do with its lack of interest in the low-end to mid-range segment, a category Xiaomi has been serving quite faithfully. Even Apple has barely anything to celebrate considering its unremarkable 0.9 percent growth over the same time-frame last year.

Lenovo’s sub-$100 offerings such as the A369i and A316 helped it achieve volume sales. LG’s F and L series were did well in emerging as well as developed markets, and then it launched the G3 flagship too. Xiaomi’s success is attributed mainly to its focus on its home country of China and adjacent markets. Its Mi 4 handset apparently gave it a boost in the high-end segment and it has been enjoying a warm welcome in India since it stepped ashore with the Mi 3.