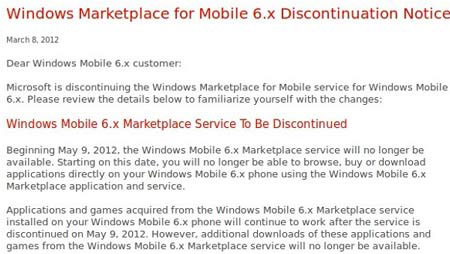 Since the focus has been shifted on Windows Phone, it seems like the Windows Mobile software is being left far behind in the race. It has now been made more evident from the announcement that Windows Marketplace for Mobile 6.x will soon be shut down.

According to a recent press release brought to light by Engadget, the app market for the Mobile 6.x operating system will cease to exist from May 9, 2012. Starting from the aforesaid day, customers with handsets running on the older Windows mobile platform will not have an official outlet for application download. Neither users, nor developers will be able to access the store.

Reportedly, Microsoft had started dropping hints at the Windows Mobile Marketplace shutting shop a little earlier than this official announcement’s revelation. The company has stopped accepting new software submissions, which leaves users with a limited number of apps for their handsets.

Although the service will cease to exist from the aforementioned date, apps that have been already downloaded will continue to work. However, they will not be updated, at least unless the concerned third party developers provide a way to do it.

The company also mentions that this closing of shutters will result in a ‘hard reset’ for all concerned phones. Users will no longer be able to access any data and user-specific settings acquired from the Marketplace, along with other such phone data will be wiped off.

The Windows Marketplace for Mobile 6.x will breathe its last on May 9, 2012.