WhatsApp has introduced a new update to Android and iOS that brings with it a voicemail feature. The update is available in v2.16.229 for Android and v2.16.8 for iOS. You can now leave a voicemail for a person if they reject or do not pick up your WhatsApp call. The function can be accessed from the call screen.

If your call goes unanswered, the screen displays three options – Cancel, Call Again and Voice Message. To leave a voicemail, you will have to press Voice Message. Holding down the option enables you to record a voicemail from your end. Releasing the on-screen button sends the message across to the person you were trying to call. 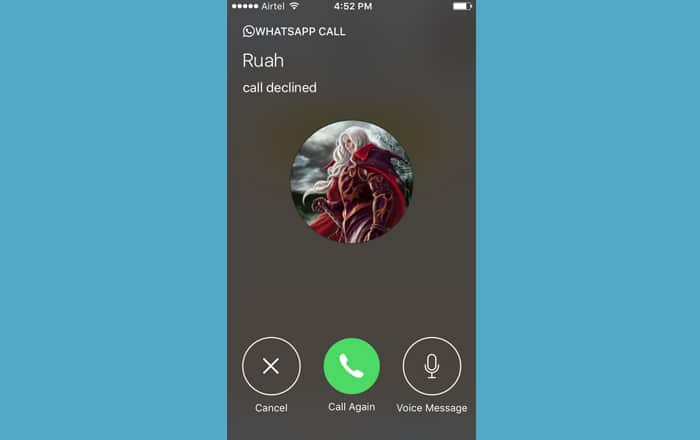 Much like the voice message option in chat, voicemail can be cancelled by sliding your finger to the left of the screen. Unfortunately, users cannot hear their message before sending it. WhatsApp will hopefully add the feature in later updates. There is a beta version of WhatsApp on APKMirror that allows you to share a particular message with multiple recipients.

Earlier, users could send the message to only one recipient at a time. The update now includes the option of sending one message to multiple individual contacts or groups. The same can be used to forward WhatsApp messages as well as to share other media from the phone. When forwarding messages to people, the app now displays a list of frequent chats. This is with the aim of faster sharing of content.

WhatsApp recently introduced changes like bigger emojis and a zoom-in/zoom-out option for videos. There is also talk about video calling through the app being in the testing phase. Support for GIF images is also in the pipeline.