Home Apps How to remove blue ticks from WhatsApp, Android only!

The WhatsApp developers who had magicked two blue ticks into our complicated social lives are now feeling so sorry for us, they’re offering a solution in the form of a new beta version of the messaging tool for Android users. Since it’s already out there, we’re assuming the function will hit regular users soon enough through iTunes, Google Play Store, BlackBerry World and so on.

For now, you can download the update directly from the WhatsApp website by hitting this link. It’s called version 2.11.44 and obviously comes in the form of an APK file. If it’s possible that there’s a single person on this planet who didn’t realize what those blue check marks were in the midst of all this noise about breach of privacy, let’s break it down for them. 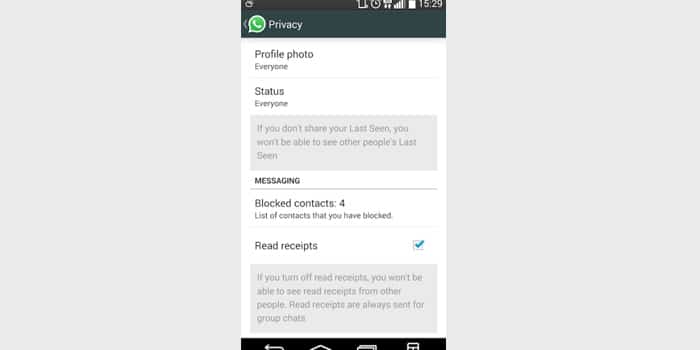 WhatsApp normally displays two ticks which appear beside a message you send, first when it has been deployed and then, when it reaches the receiver. Early this month, people suddenly noticed these marks changing into a bright blue color.

Related post: WhatsApp users, you can’t lie anymore about not having read messages

A refreshed FAQs section on the WhatsApp website revealed that this was meant to notify the user about the receiver of the message having read it. Only a single tick shows up beside a message sent to a group and this too turns blue when the everyone had perused it.

Also see: If you reside in India, no need to pay for WhatsApp for now at least

Can you imagine not being able to lie about not having read an unwelcome message? Android Police discovered WhatsApp’s latest version to host a Read Receipts option in Privacy under Settings, which lets you turn off the function and stop the checks from turning blue.

It works both ways; also preventing you from seeing when others have read your message. Considering the outrage that greeted the blue ticks on WhatsApp, we don’t think you’ll have to wait too long for its new version to hit mainstream download channels.