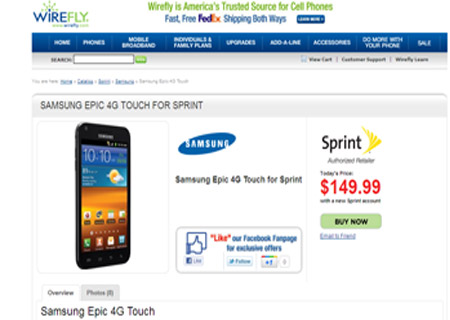 The Samsung Epic 4G Touch smartphone, better known as the Galaxy S II for Sprint is now up for pre-order at Wirefly with a discount of $50. It was announced by the end of last month that Sprint, along with AT&T and T-Mobile will carry the Samsung Galaxy S II, handset being customized for each carrier.

The device, a Sprint clone of the globally popular Galaxy S II, is a 4G smartphone running on the Android 2.3 Gingerbread operating system. Powered by a 1.2GHz dual-core Exynos processor by Samsung, it sports an 8MP camera for capturing images and recording 1080p HD videos. A 2MP secondary camera is also provided for the purpose of video calling and chatting.

The handset comes with an integral memory of 16GB while the external memory support is expandable up to 32GB. It supports numerous connectivity options like Bluetooth version 3.0, Wi-Fi 802.11 b/g/n/a supporting up to eight enabled devices, 3g/4g mobile hotspot, and WiMax 1xEV-DO Rev. A.

The Samsung Epic 4G Touch for Sprint, originally offered by the network carrier for a price of $199.99, is now being offered by Wirefly at a discount rate of $149.99. The discount rates are applicable only for pre-orders. Sprint has announced the date for the availability of the device as September 16.