If you haven’t already heard, 8-year CEO of Prudent Games Reuben Paul, will be speaking at the Ground Zero Summit which is to be held in Delhi today. This child prodigy of Indian origin has taken to the stage three times in the past in order to give lectures on the subject he loves best.

Paul will be addressing audiences at the Delhi event on the need to raise awareness about cyber security amongst kids. He will also be giving a demonstration of ethical hacking. The 8-year old has learned the Object C programming language and has moved onto Swift programming for Apple’s iOS platform. He was seen delivering his ‘Creating a Safe and Secure Cyber World for Kids’ speech at (ISC)² Security Congress 2014. 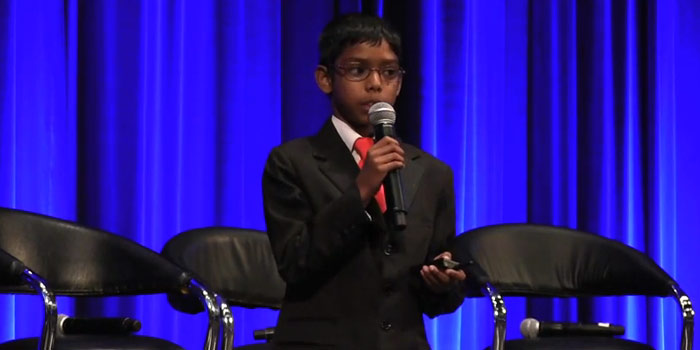 Prudent Games which has ‘Learn While You Play’ as its motto, currently offers three educational games called Cracker Proof, Shuriken Math and Crack Me If You Can for children. Programming isn’t the only achievement Paul can boast about. He was voted ‘America’s most beautiful baby’ in 2007 when he was 2 years of age. He also became the youngest person stateside to qualify for the Shaolin Kung Fu Black Belt. We don’t know about you, but we’re already feeling like underachievers now.

NDTV says that Minister of State for External Affairs V K Singh, Home Ministry Joint Secretary Nirmaljeet Singh Kalsi, National Technical Research Organization Director of Cyber Security Operations Alok Vijayantand and Special Commissioner Police (Traffic) with Delhi Police Muktesh Chander, will be speaking at the event too. Incidentally, a security expert who claimed to have hacked into Xiaomi’s servers was supposed to reveal all at the summit until he got caught in a legal wrangle with the Chinese brand.

Reuben Paul is scheduled to give his speech at the cyber security summit on November 14, that’s today.