ISRO’s Mars Orbiter or the Mangalyaan, as it’s lovingly called in India has managed to capture images of the comet Siding Spring through its color camera. These pictures have been released on a day which saw the European Space Agency’s robot Philae successfully land on another comet, 67P/Churyumov-Gerasimenko.

The images which ISRO’s Mars Orbiter has sent back were part of an ordeal which took place on October 19, 2014. Siding Spring had approached the red planed on the said date, and the Indian spacecraft had to reposition itself to stay out of its reach. 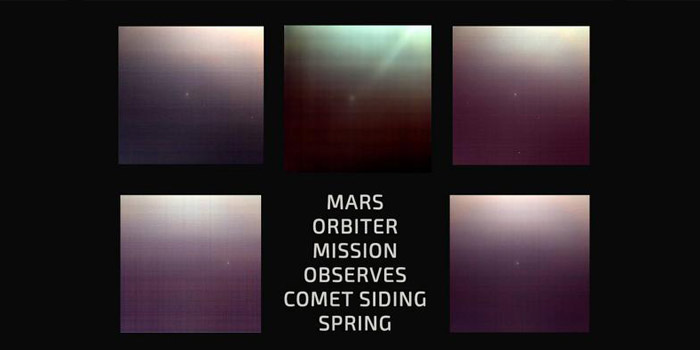 The Mars Orbiter also famously tweeted, ‘Phew! Experience of a lifetime. Watched the Mars comet SidingSpring whizzing past the planet. I’m in my orbit, safe and sound.’ During the last 40 minutes of this encounter, the spacecraft managed to click the all-important images of the comet which we can watch right now.

What we’re seeing here are photographs of Siding Spring’s Coma, which means the top bright portion of a comet. The sequence of photographs depicts the movement of the Coma from 1.8 lakh kilometers away from the Mars Orbiter to just 1.3 lakh kilometers near it.

Also Read: GSLV-Mk III is being prepared for launch in first half of December 2014

While its Mars Orbiter continues to bring us more interesting images and important information, ISRO is also busy at work preparing for the experimental launch of the GSLV-Mk III which will act as a vehicle for advanced satellites in the future.