Home Nokia Now get Sholay on your Nokia Mobile Phone 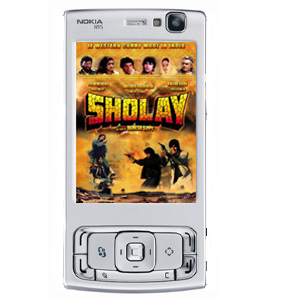 Telecom revolution has made it convenient for “Sholay” fan-followers to watch the blockbuster movie on their mobile phone. The Nseries is a well-known multimedia sub-brand of Nokia. Nokia has unveiled today two new mobile handsets N81 and N95 8GB that have the famous movie preloaded on the handset.

Business director of multimedia, Vineet Taneja, Nokia India says “It is one of the biggest blockbusters that the Hindi film industry has churned out. There could have been no better option than this flick, which is liked by every age group equally.” He added, “The facility will be available in every N81 and N95 8GB handset across the country. However, there will be no option of sub-titles.”

The two new mobile handsets N81 and N95 8GB with the fully loaded movie was launched by Bollywood actress Isha Sherwani after her fabulous dance performance.

Besides the high storage capacity, the N81 8GB handset is also preloaded with English music videos, best-selling Bollywood as well as Hollywood songs and all-time hit comedy scenes from Hindi movies across genres.

The N95 8GB offers a display of 2.8-inches and improved battery power. The 8GB flash memory is actually been created keeping in mind those who like to enjoy videos, play games or locating favorite destinations with full navigation with assisted global positioning system (A-GPS).

The launch was not only meant for the release of the two handsets but it was followed by a panel discussion on the future of the burgeoning mobile entertainment market, which currently accounts for 37 % of the $28,000 million non-SMS data revenue.