While the world’s patiently waiting for October to come (so are we), Nokia fans in India have been anticipating the Lumia 1020’s launch in India which took place today. Along with the handset, the company has also announced a couple of accessories such as the Camera Grip and the Wireless Charging Shell.

The Lumia 1020 isn’t the first to come with the PureView technology. Other Lumias such as the 920, 925 and 925 already have the enhancements onboard. The latest smartphone, however, has the largest image sensor amongst the lot, the same 41MP shooter seen on the Nokia 808. Complementing the camera are optics from Carl Zeiss and other attributes such as OIS, a BSI sensor and a xenon flash.

To top it off, Nokia has given the device various other technologies including Rich Recording for high quality audio in videos. Let’s take a quick looks at the Lumia 1020’s specifications – The smartphone sports a 4.5-inch WXGA AMOLED touchscreen backed by ClearBlack, super sensitive touch and PureMotion HD+ technologies. Apart from these, there’s Corning Gorilla Glass 3 for better protection against scratches and scrapes.

A Qualcomm S4 dual core processor clocked at 1.5GHz delivers the steam and there’s 2GB of RAM to ensure everything works smoothly. For storage, you’ll get 32GB onboard memory and 7GB free SkyDrive cloud storage, but there’s no microSD card slot. The Windows Phone 8 GDR2 OS runs the show tagging along Nokia’s Pro Camera app and Glance Screen amongst others. 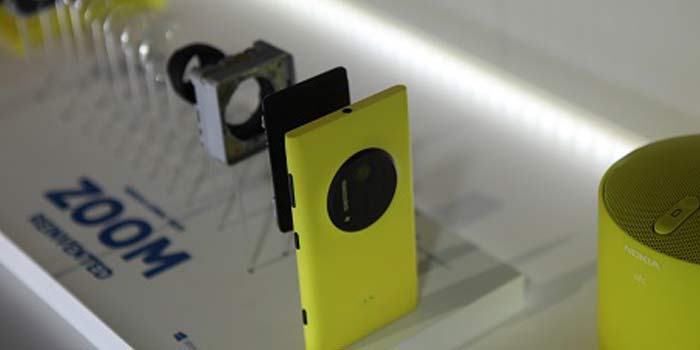 Nokia hasn’t given the Lumia 1020 an official price as yet, but the Camera Grip and the Wireless Charging Shell have been tagged at Rs 7,500 and Rs 3,200, respectively.