Nokia has announced that its Chennai plant will be turned into a manufacturing facility after Microsoft acquires the former company. The two concerned conglomerates have already disclosed that the closing of the acquisition will be carried out on April 25, that is, this Friday.

Nokia has made the decision of selling the plant, as it has multiple unsolved tax disputes with the Indian government and these cases are currently in the court. Times of India reports that it will not be possible for Nokia to end these disputes before the closing of the acquisition and thus it is left with no other option. 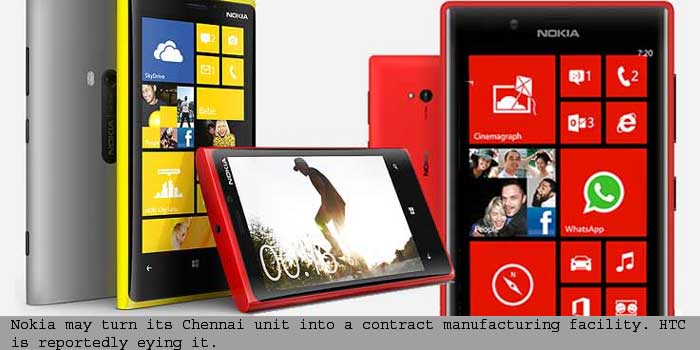 HTC has expressed interest in acquiring the plant, however, it is not clear as yet whether the plant is open to third party buyers or only Microsoft. But there are not many chances of the Redmond-based company buying it, considering that it can always outsource production to China.

The Taiwanese conglomerate mentioned above as well as a lot of other manufacturers may be interested in purchasing the plant, thanks to the boom in the mobile phone segment in India. HTC will make the most of this demand and release a number of smartphones for different prices in June, Chialin Chang, HTC Chief Financial Officer informed the aforementioned newspaper.

As of now, Nokia has not revealed that it is ready to sell its plant located at Chennai, but it is kind of obvious because the Finnish manufacturer is offering voluntarily retirement to its staff and has started scaling down its employees. Also, Nokia has already shifted production of its Asha devices to Vietnam.