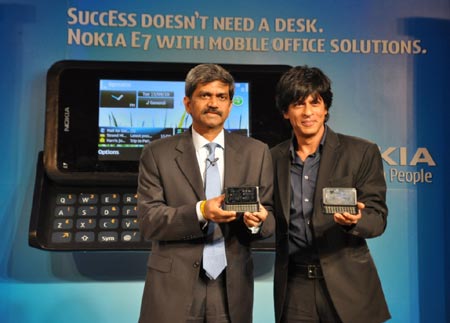 For the past couple of weeks, we’ve been reporting about the Nokia E7 gearing up to pave its way into the Indian market. Following a string of hype, Nokia has now released the all-in-one business smartphone namely the E7. As the company released the handset, it also announced a tie-up with Vodafone to extend a free 2GB data plan for six months.

Plugged as the new age Communicator, this new handset is said to usher in with a wave of features for satiating varying needs of professionals on the move. It comes equipped with Microsoft Exchange ActiveSync support, allowing users to edit documents while they traverse from a place to another. It also flaunts a 4-inch AMOLED touchscreen display whereas the embedded ClearBlack technology from the company helps to refine outdoor visibility.

“The smartphone market in India is witnessing a phenomenal growth. Trends such as 3G, social networking and video will further drive this growth in the coming years. Consumers today, seek a device that allows them to do a lot more – both in their personal and professional lives. Nokia E7 is an all-in-one business smartphone that offers a superior ‘mobile office’ experience coupled with compelling entertainment options. We are confident that with the Nokia E7, we will redefine the consumers’ expectations from the smartphone segment,” commented D. Shivakumar, Vice President and Managing Director, Nokia India.

The smartphone has been outfitted with a four-row QWERTY keypad, extending an easy and comfortable typing experience. Pre-loaded with apps such as Mail for Exchange, IBM Lotus Notes Traveler, Adobe PDF Reader and F-Secure anti-theft software, its facilitates users to enclose important official work on the device.

While flaunting a distinctive look, the handset unfolds a full suite of multimedia and Ovi experiences. With over 10,000 pieces of relevant content, the Ovi Store is expected to engineer a boosting performance on the E7. Users who like to keep themselves updated with business news can make the optimum out of three newly introduced business channels namely CNBC TV18, CNBC Awaaz and Bloomberg in a web TV format.

The Nokia E7 has been unleashed in the Indian market and can be purchased from the company’s priority stores for a Best Buy price of Rs. 29,999.