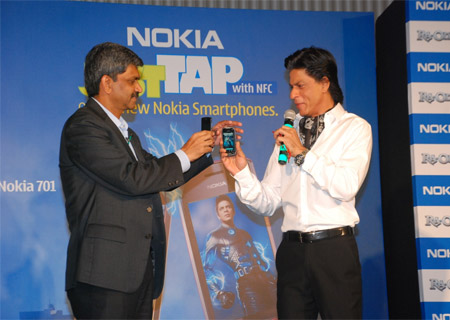 Close on the heels of their worldwide launch, the three new Belle handsets from Nokia’s stable, 700, 701 and 600 made an entry into India through an event held in Mumbai yesterday. The latest devices run on the recently launched Symbian Belle operating system.

The handsets integrate the ‘Just Tap’ with NFC feature. Nokia has also tied up with the forthcoming movie, Ra.One, a Red Chillies Entertainment production. This will not only facilitate the promotion of the movie but also help in developing NFC services in India.

Commenting on the launch, Mr. D Shivakumar, Managing Director, Nokia India stated, “The Indian smartphone market is growing at an exponential rate. Consumers today are looking for differentiators that go beyond multi-tasking and processor speed. With our latest range of smartphones on Symbian Belle, we are introducing a path-breaking technology in the form of ‘Just Tap’ with NFC. Today, our association with Ra.One brings alive an exciting set of experiences on NFC with Symbian Belle for our consumers.”

The company announced its plans of executing certain pioneering initiatives ahead of the release of Ra.One. One of them includes giving customers a chance of watching the movie one day prior to its global release. They can also access exclusive content from the movie via the Ovi store or by visiting the nearest NPP and tapping their NFC enabled device with Ra.One NFC tags.

While the Nokia 700 is believed to be the most compact touchscreen monoblock smartphone, the 600 model is the company’s loudest phone at 106phon. The Nokia 700 runs on a 1GHz processor and equips an 8MP full focus camera with dual LED flash and 2X digital zoom.