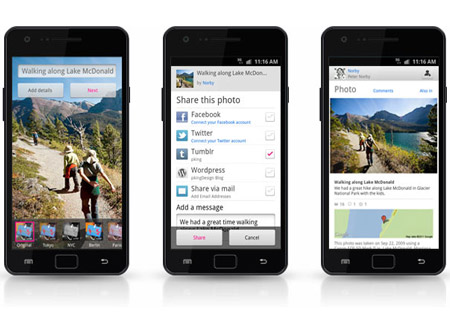 The popular photo-sharing application, Flickr, has finally debuted on the Android platform. Besides announcing the arrival of their application on Android, the official Flickr blog has also disclosed a new Photo Session feature.

Allowing users to capture photos, the new Flickr for Android improvises on them with filters and quickly sends the pictures to Facebook, Twitter and other networking sites. Thus users can share photographs with friends while out and about.

The browsing and navigating features have been specially designed to make use of maps, tags and activity around users’ photos. The Flickr app claims to always keep its users informed about the latest comments and activity on their pictures.

The new Photo Session feature apparently introduces a totally new way of sharing pictures with friends. Through this feature, users can browse through photos from anywhere in the world. Users have to create a ‘Photo Session’ by going to any set or photostream that incorporates support for sharing options. The next step involves finding the photos which they wish to share and choosing the ‘Start a Photo Session’ option via the sharing menu to invite friends.

Photo Session enables users to view photos with friends in real time even if they are far away. They can have even more fun with this feature which allows them to chat with each other and draw on photos using the in-built tools.

The Flickr app is now available for free at the Android Market.