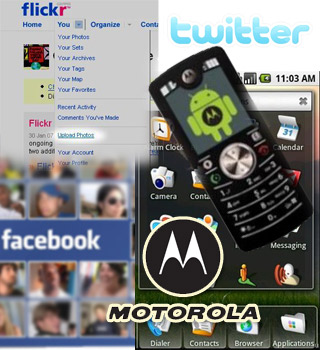 Seems like the rumour mills are really spinning these days. Apparently HTC is not the only player as far as Android phones are concerned. The coming days should see the release of an innovative Motorola social networking phone based on Google’s Android operating system.

The news is out after a Motorola job advertisement mentions the requirement for persons in the Interaction Design team position to work on their mobile products including their new Android Social Networking SmartPhone. That’s what they call it!

Motorola appears to be taking quite a different approach compared to the T-Mobile G1. The Android-based handset will actually act as a mobile hub catering to all your social networking needs. It will give you complete and really quick access to the ever so popular Twitter, Flickr, WordPress blogs, Facebook, Digg, and much more.

We guess Motorola is fast trying to derive advantage of the popular social networking sites. And of course, they are trying to benefit with the mobile lifestyle which has got us more bridged than ever.

So like you have exclusive music phones and SMS phones, there just may be a Motorola Social Networking phone on its way.