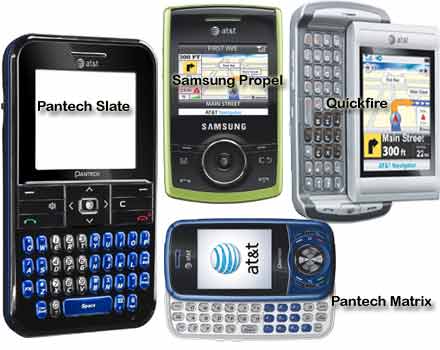 If you use your phone for text messaging more than anything else, here’s some news that may excite you, especially if you happen to be an AT&T customer. You heard it right! AT&T is all set to produce a quartet of QWERTY phones with dual slider namely the Pantech Matrix, Samsung Propel, Pantech Slate and Quickfire.

Starting off with the Pantech Matrix, the handset slides both ways. So you have a vertical slide to display a numeric keypad below, while there’s a second side slider that unleashes the QWERTY keyboard so you can get going with your messages. It’s a 3G-enabled handset supported by AT&T Navigation and Video Share and you also get a 1.3 megapixel camera. To be available in blue, green or red, the handset will sell for $79.99 with a 2-year contract and a rebate.

Next up is the Samsung Propel, a squarish slider phone with instant messaging, Mobile Email, AT&T Navigator, CV, AT&T Video Share calling, AT&T Mobile Music, and a 1.3 megapixel camera. Dressed in blue, green, red, and white with red, the Samsung Propel also retails for $79.99 with a 2-year contract and a mail in rebate.

Third in line is the Pantech Slate claimed to be the world’s thinnest full QWERTY handset. With a candy bar like form factor, the device sports a 1.3 megapixel camera, instant messaging, Mobile Email and Bluetooth connectivity. Draped in black with royal blue, the Pantech Slate is a pretty low-cost considering it’s just about $49.99 with a contract and rebate.

Finally the last phone to be released is AT&T’s own Quickfire. Dubbed as the Knick, this is a slider phone packed with a full touch screen. In addition, the Quickfire is a 3G handset attributed with a 1.3 megapixel camera and should be yours for about $99.99 with a contract and rebate.