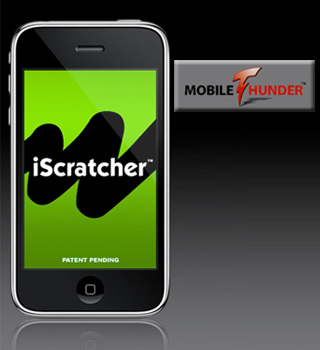 Mobile Thunder has introduced a new and unique iPhone app called the iScratcher. This new app turns the iPhone into a scratch-to-win game card. It is targeted towards the upcoming mobile advertising platform and is said to represent the next generation of scratch-off contests, sweepstakes and giveaway promotions.

This app is based on a simple concept. Advertisers will sponsor scratch-off games that will be displayed on the iPhone. The players will have to “scratch off” a game card by wiping the screen with a finger. This will reveal sponsor brand images and potential prizes. Users can get directions to the nearby stores where the revealed prizes can be collected with just the tap of a finger. The iScratcher will use the built-in GPS technology to provide location specific games.

“iScratcher takes interactive mobile entertainment to a new level,” said Titus Blair, MobileThunder’s chief innovation officer. “Every game is engaging, and you want to play all day. Redeeming a prize will be a snap, with no paper tickets to forget or lose. This is the first prize-awarding app released to a mobile device that leverages touch and location technologies, allowing marketers capabilities never before imagined.”

“This is a dedicated, rapidly growing channel that is visually engaging and entertaining–advertising that is addicting,” added Pete Perez, MobileThunder’s head of marketing. “There’s nothing like iScratcher available for smartphones; it’s a new model for interactive marketing. Businesses today are looking to do something fresh and ‘high tech’. The initial reaction from players and potential sponsors has been very exciting.”

Users can also compete with other players by collecting points by playing the Mega Points Game. Mobile Thunder also plans to provide fully functional version of this app for Android smartphones and other mobile platforms such as Blackberry in the near future.

The Mobile Thunder iScratcher app can be downloaded for free from internet-capable iPhones and iPod touches.