The Nokia 215 feature phone is probably the last of the popular brand left up Microsoft’s sleeves and it’s quite surprising that the company has decided to launch it. This could mean that the Redmond giant still has an interest in the ultra-cheap handset market and might offer more in the future.

The Nokia 215 is obviously going to be targeted towards developing markets and Microsoft will be offering it in two different versions, one with a single SIM card slot and the other carrying two. Since it’s a feature phone, you won’t be treated to 3G connectivity, but you will have access to the internet over 2G GPRS and EDGE data networks. 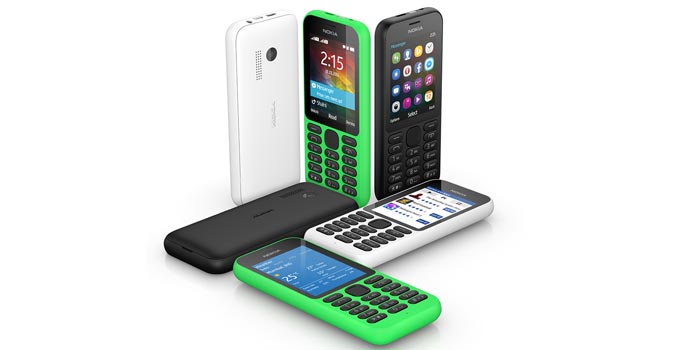 The Nokia device is basically being touted as a first handset or a secondary option since, you know, an average smartphone will most likely die on you after several hours. This feature phone, however, will offer some great battery life of up to 29 days on standby (21 days on the dual SIM model) or 20 hours of talk time on a single charge.

Also read: Lava EG932 launched for Rs 11989 in India via Snapdeal and Reliance

This is something even most smartphones with 4000mAh batteries cannot achieve. With music playback, the number can go all the way up to 45 hours (50 hours for FM radio). The Nokia 215 looks pretty attractive and it has a durable build with color options of green, black and white. The company has also thrown in the Slam sharing technology and a VGA rear camera.

The Nokia 215 has a price tag of just $29 before subsidies and taxes and it’ll go on sale in the Middle East, Asia, Africa and Europe during Q1 2015.