Home Windows Phone Microsoft Lumia 535 to be launched into Indian market for Rs 9199...

The Microsoft Lumia 535 which is the first Windows Phone smartphone from the tech giant without Nokia’s branding stuck to it, has made its way into India carrying a very attractive price tag of Rs 9199. The phone is yet to be made available for purchase and it’s expected to hit stores on November 28, that’s today.

As you probably know, the Microsoft Lumia 535 is an enhanced version of the Lumia 530 smartphone which is the cheapest option currently available on the market for just Rs 5377. The phone can be considered the company’s second selfie handset, making it a cheaper alternative to the Lumia 730 that’s retailing for around Rs 15000. 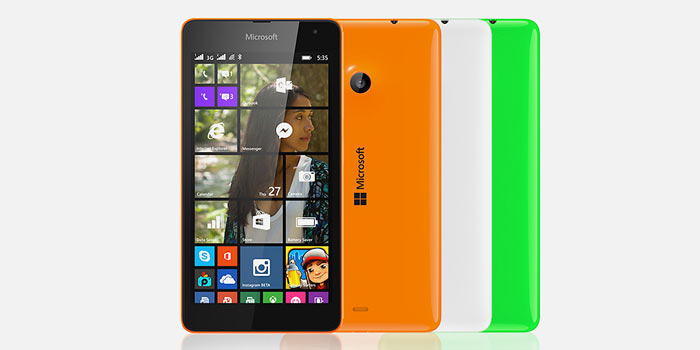 What makes the latest Microsoft phone so attractive is that it offers a 5-inch qHD IPS display with Corning Gorilla Glass 3 and dual 5MP cameras, the front one featuring a wide-angle lens. Also, it comes with Windows Phone 8.1 and the latest Lumia Denim update pre-installed.

Also read: OnePlus One India launch expect on December 2, here’s how to get an invite

What’s disappointing about the handset is that it allows video recording at only FWVGA resolution, while other devices in the same category have at least 720p HD capture. The Lumia 535 is powered by a 1.2GHz quad core Snapdragon 200 processor and it has dual SIM slots with HSPA+ connectivity.

The Microsoft Lumia 525 dual SIM will hit stores in five options of black, white, orange, green and cyan. As we’ve already mentioned above, you can grab it on November 28.