The Maxx Mobile Tab722 is a 7-inch Android slate that was launched by the company on the Independence day along with 14 other gadgets. Apart from the tab, this range included 4 Maxx Mobile smartphones and the others were feature phones in various colors and designs.

Let’s take a look at the Maxx Mobile Tab722 slate’s specifications. As we already said, the device is adorned with a 7-inch touchscreen and the WVGA display is capable of rendering visuals in 480 x 800p resolution. Under the screen lies an intuitive interface that can be attributed to the Android Ice Cream Sandwich 4.0.4 OS. We don’t think the gadget will receive the Jelly Bean upgrade any time soon though. 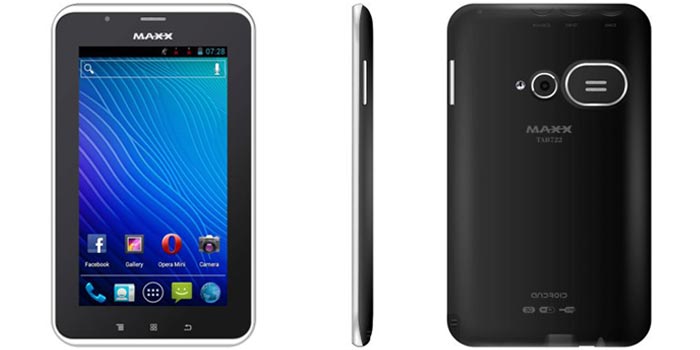 The device not only offers the voice calling facility, but also extends support to two GSM SIM cards at the same time. When it comes to capturing images and videos, you can rely on the tab’s 3MP rear camera complete with flash and digital zoom. A 1.3MP webcam has also been thrown into the mix for facilitating conference calls on the move.

Furthermore, this slab acquires steam from a MediaTek MT6575 processor which sprints at a speed of 1GHz and seeks assistance from 512MB of RAM. There’s merely 4GB of onboard memory, but an expansion slot should allow increasing it further by up to 32GB using a microSD card. You can expect other essential features like Bluetooth, Wi-Fi, GPS and more to be present within the confines of this gadget.

The Tab722 will reportedly be made available in the subcontinent for a budget-friendly price of Rs 8000.