There has been a sudden influx of low cost smartphones in India and now that people have started adopting them, the demand for feature phones has decreased to a great extent. The report that suggests that entry-level smartphones are cannibalizing basic handsets has been formulated by the International Data Corporation’s (IDC) APEJ Quarterly Mobile Phone Tracker.

The research suggests that the smartphone market in India has grown by 229 percent year over year in the third quarter of 2013. In Q3 2012, 3.8 million smartphones were shipped by vendors, whereas at the same time this year, the market moved as many as 12.8 million devices. And when compared with the second quarter of 2013, the growth was of over 28 percent. 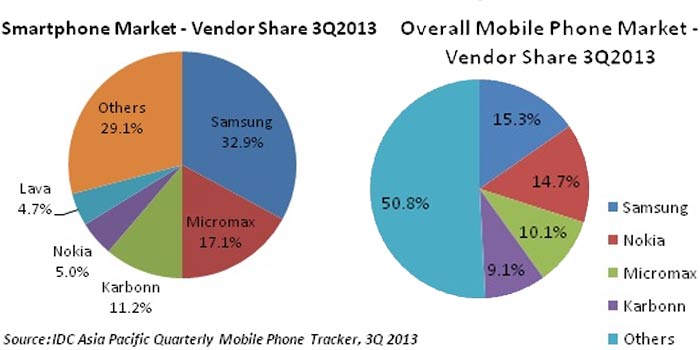 Indians continue to be mesmerized by big screen phablets, that is, smartphones that have screens measuring between 5 inches and 6.99 inches as their share in the third quarter was 23 percent. If we take all types of mobile phones into consideration, then the market growth was 12 percent year over year and 7 percent quarter over quarter. Feature phones market did grow by 3 percent compared to last year, but smartphones managed to get a lion’s share with 81 percent.

Samsung is still the undisputed king in the smartphone market with 33 percent share and Micromax ranks second with 17 percent contribution in Q3 2013. Next is Karbonn with 11 percent domination and the fourth position goes to Nokia with 5 percent claims on the market. Lava takes the fifth spot as 4.7 percent of the total smartphones in the country are manufactured by this company.

The IDC report is for the third quarter of 2013.