WhatsApp for iPhone has finally received a major update and the instant messenger now has an all new user interface that goes perfectly with the iOS 7 platform. You can even expect the common bug fixes and performance improvements from this new version that has already gone live.

So now that one of the most popular instant messengers has been given a new user interface, it should go well with the new UI of the updated iPhones. Let’s take a look at all the new features of the applications. It now boasts of broadcast lists, so you can prepare various lists of friends, colleagues, classmates or more to send a particular message to a pre-defined set of people. 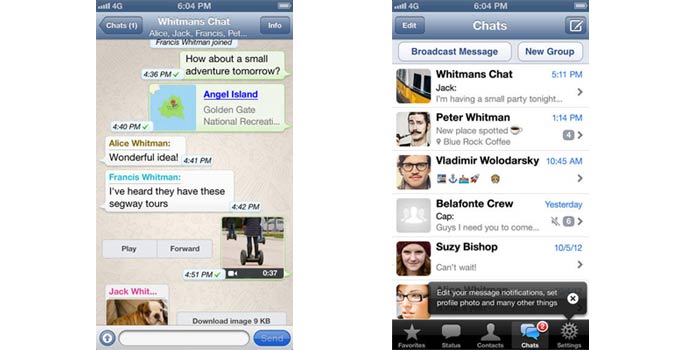 The location sharing function supports 3D map view and lets you search or hide places with ease. In case you used to get annoyed with small thumbnails, the developers of WhatsApp have done exactly what you wanted. Yes, they have increased the size of those thumbnails so you get a better view. Some new alerts and notifications sounds can also be found in WhatsApp Settings, Notifications, New Message.

And what’s more, it’s now way easier to manage your blocked contacts, just check ‘blocked’ in chat settings. You will not even have to change the text size in WhatsApp, as it uses the same one as determined by you in general settings of the platform. In addition to these features, you get the cropping option for images you are about to share and do not forget to create backups of conversations in iCloud.

The WhatsApp for iPhone update has already started rolling out and the application is available for free through iTunes.