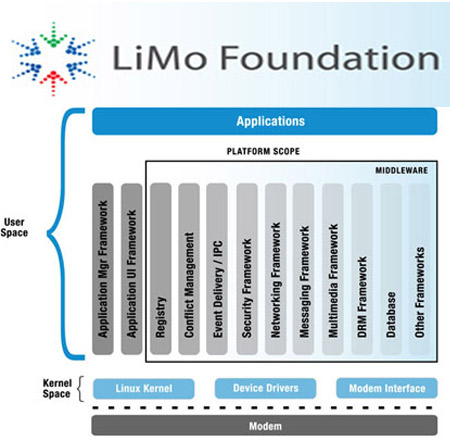 LiMo Foundation, which is a consortium of mobile leaders that deliver an open handset platform for the entire industry has announced the availability of the first release of the LiMo Platform. This Linux-based platform will be the first globally competitive platform for mobile phones. To begin the widespread engagement of develop talent and innovation, the consortium has also released the application programming interface (API) specifications.

According to Morgan Gillis, executive director of the LiMo Foundation, “The LiMo Platform is being readied by mobile leaders working in unison to deliver an open handset platform for use by the whole industry. The first release of the LiMo Platform combines technologies already extensively market proven within an array of leading handsets. This will enable initial LiMo handsets to register in the marketplace far more rapidly than handsets based on unproven technology.”

For the Release 1 (R1) of the LiMo Platform, founder members of the consortium including Motorola, NEC, NTT DoCoMo, Panasonic, Samsung and Vodafone have joint hands to integrate the technology in R1 within their commercially available handsets.

The LiMo platform is a modular, plug-in-based, hardware-independent architecture that has been built around an open operating system with a secure, run-time environment for support of downloaded applications.

The LiMo platform used the Linux operating system as its core technology mainly because for its acceptability by the entire mobile industry, its rich functionality and scalability. Not only that; Linux has scored a lot of success in embedded systems including mobile phones. Besides, it offers huge potential to easily ‘cross-platformize’ with other product categories.

“We are very proud of the transparent, balanced and harmonious contribution process that led to the on-schedule rollout of R1 of the LiMo platform and our API specifications. This unique process, with its shared leadership and decision-making, has delivered the benefits of both community-based and proprietary development,” stated Kiyohito Nagata of NTT DoCoMo, chairperson of LiMo Foundation.

“The evolution of the platform is an ongoing process. We are delighted with the wide range companies contributing to that process as we now work on Release 2,” Nagata added.

LiMo’s API specifications are immediately available to third-party developers in beta as of now at www.limofoundation.org. They can use the specifications to build new applications to deliver next-generation consumer experiences across a stable base of globally deployed mobile devices.