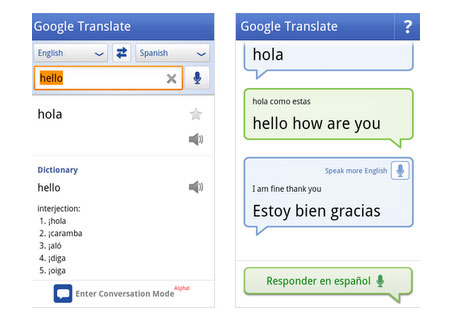 The updated app comes along with dropdown boxes to help select the languages users want to translate from and into, an advanced input box, and cleaner icons and overall layout. The experimental feature Conversation Mode which is still in its initial stage permits individuals to communicate with another person in a different language with ease. Presently, this function translates between English and Spanish.

Owners can easily press the microphone for their language and start speaking in the Conversation Mode. The app will translate the owner’s speech and read the translation out loud. Further, the other individual can respond in a different language without any hindrance. The company highlights that as this technology is in its earliest stage, distinct elements like regional accents, background noise and rapid speech may cause some issues.

This new version can be downloaded from the Android Market on devices running Android 2.1 and above.