Google Now has been supporting third-party applications since earlier this year, but the roster has still been very limited. Well, that has changed with the search giant’s new announcement which states that over 70 new Android apps have been given the green light for integration with the service.

A post on the official Inside Search blog notes that you’ll now have access to information from your favorite applications without even the need of running them. All details will be displayed under the Google Now interface. For example, if you use Spotify, TuneIn or YouTube, the service will start showing you recommended stations and playlist through cards. 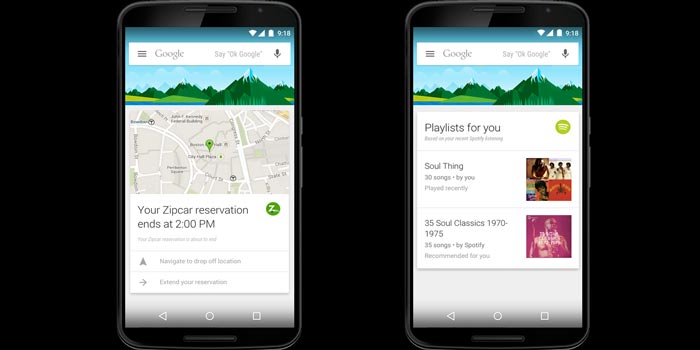 Google further notes that this capability will be able to deliver latest news updates through partners like News, Circa, or feedly, allow you to play your bill with OpenTable and even keep track of your fitness goals via Runkeeper, Jawbone or Adidas. Of course, not all of the supported applications and services are available everywhere.

Previously, the company teamed up with over 30 developers to offer Google Now integration. The 70+ new applications brings the total to over a 100 and you can be sure that this number will grow in the near future. A complete list of supported apps and services can be found over at this link.

Google has been on a roll this month as it released numerous updates to various apps and services. A couple of weeks back it make it easier for you to find your lost phone by simply using the search box on its main website. Android for Work was introduced for non-Lollipop devices and we also see the Wear platform get a huge update.

In order to see information from your favorite applications, make sure you have the latest versions installed and of the Google app as well.