How people will use Google Glass is an issue that makes many feel skittish though apps such as SHORE, a software which detects human emotions in real time, may actually be helpful to those with disabilities. Created by the Fraunhofer Institute for Integrated Circuits IIS, SHORE which stands for Sophisticated High-speed Object Recognition, employs the camera embedded in Google Glass to analyze a person’s facial expressions and guess what they are feeling.

‘Guess’ may be the appropriate word to use since SHORE’s calculations are based on understanding structure-based features, learning algorithms and a data-set consisting of over 10000 annotated faces. The potential that Google Glass has to provide the wearer personal information of anyone walking down the street by simply scanning their faces and streaming their online information, has been troubling a lot of people. 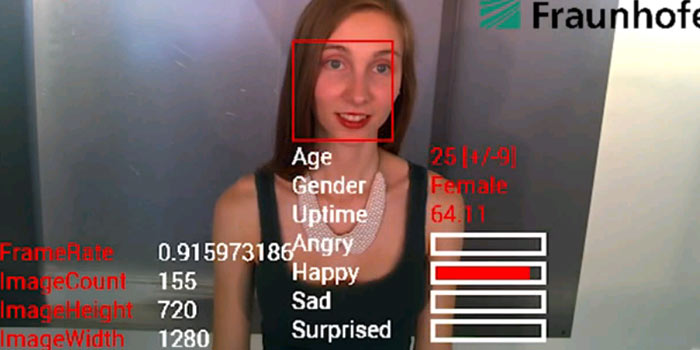 The future of dating is set to get creepy indeed, and this Vimeo video called Sight sums it up very nicely. So the Fraunhofer researchers have emphasized on SHORE’s inability to determine a person’s identity. They’re not saying it’s impossible for the software to be altered to pull up the subject’s online data, but just that it doesn’t do this. This application is capable of detecting an individual’s gender and age as well.

On the positive side, SHORE in combination with Google Glass, can help the visually impaired, those with disorders like autism and others who find it difficult to gauge emotions through facial expressions. Whatever information is incomprehensible to the wearer could be superimposed in their field of vision or via transmitted audio through the glasses. Fraunhofer believes interactive games and market researchers will be able to benefit from applications like this one too.

Since Google Glass application is not commercially viable yet, it will be some time before regular folks can get their hands on a pair and test SHORE and other such useful apps for themselves.