More than 5.5 lakh complaints have been registered through the Delhi Police Lost Report mobile app which was launched only in February 2014.The application is designed to let people officially register grievances related to article and document loss. So if you live in New Delhi and have misplaced your PAN card, mobile phone, laptop, passport, driving license or any similar item, there’s no easier way to do it.

In case you have lost something due to theft or any other crime, it is mandatory to get in touch with the nearest police station since this becomes a matter for inquiry or investigation. You’re free to send Honey Singh lyrics and Urdu poetry to the Delhi police force’s 9910641064 WhatsApp helpline number at your own risk, but actually lodging a false report through the aforementioned app is punishable by law. 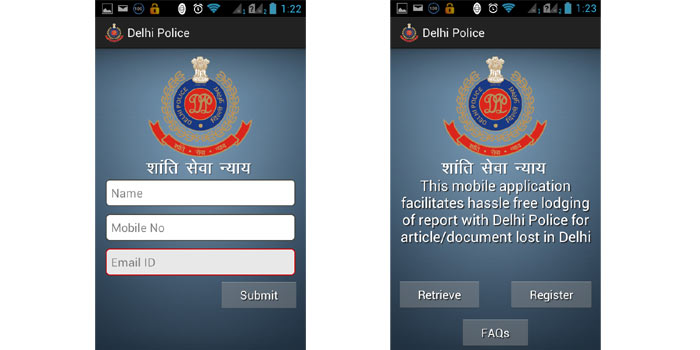 The whole purpose of the Lost Report mobile app is to save citizens the inconvenience of going to the police station to complain about misplacement of property. The tool requires users to submit their name, father’s or mother’s name, number, address, email ID as well as time, place and date of article or document loss. They must also provide a description of the missing item along with a briefly worded complaint.

Also see: WhatsApp arrives to the rescue in Uttar Pradesh as well now

Once the lost report is lodged, the aggrieved party will receive an LR number and other details along with the choice to View/Download and Save/Exit. There’s a Retrieve button which lets users find this information again as long as they’ve chosen to save it. The authenticity of the report can be confirmed by going to the official website of the Delhi police and typing in the LR number. 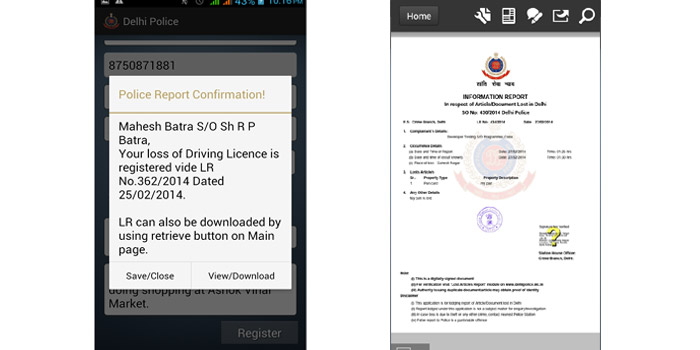 NDTV who refers to a PTI post for this story, notes that the launch of a Police Clearance Certificate (PCC) online portal has seen 7813 such certificates being issued after 9178 applications were received. You’d think only young to middle-aged folks would make use of such a facility, right? Apparently, senior citizens have also been applying for PCCs over the internet.

The positive response to the PCC web tool and Delhi Police Lost Report mobile app has encouraged authorities to consider introducing one for filing FIRs related to theft of motor vehicles too.