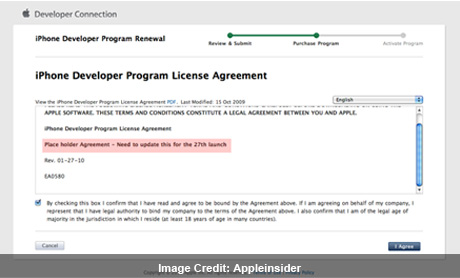 It’s probably fair enough to say that any news from the Apple quarters will make front page news in tech world taking into considering their imminent January 27, 2010 product unveiling. This tidbit’s not just any story but one that throws hints at a fresh new version of the iPhone OS by Apple as indicated by the iPhone Developer Program License Agreement sign-up form.

According to Appleinsider, an inadvertent update to the iPhone Developer Program License Agreement emerged with a placeholder referring to a January 27 release. Apparently, the company’s much-publicized tablet gizmo will operate with a variant of the iPhone OS. This seems to have convinced many that the notion of an upgraded iPhone OS fits the bill.

A placeholder on the sign-up form is cited to have read as ‘Need to update this for the 27th launch’ and thus sparked off the iPhone speculations. Reading between the lines, this could also mean the Apple’s tablet will not run iPhone OS 4.0. For most tech fanatics the wait for official news confirming these rumors may seem insufferably long.