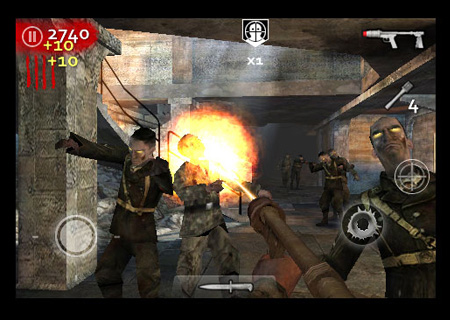 iPhone gaming addicts will be delighted with this piece of news. Activision Publishing and developer Treyarch have released a Lite version of Call of Duty: World at War: Zombies.

The Call of Duty: World at War: Zombies Lite app offers three rounds of the ‘Nacht der Untoten’ which is Night of the Undead map in single player mode. Users can travel around the map and use the various weapons from the Mystery Box. Multi-player buffs can play two rounds by means of Wi-Fi, locally or across the Internet with four players or two players via Bluetooth.

Call of Duty: World at War: Zombies claims to authentically provide the experience of one of the most well-known online games of 2009. It is said to provide unlimited rounds to both single player and the game’s highly-addictive co-op gameplay experience in full 3-D.

The Call of Duty: World at War: Zombies App was created by Ideaworks Game Studio for the iPhone and is based on Treyarch’s console version. The app can be purchased for $9.99 from the Apple App Store. The Lite version of the app can also be accessed from the App store.