Google’s Android platform’s popularity has scaled some new heights in the third quarter. According to a report by IDC Worldwide Quaterly Mobile Phone Tracker, about 80 percent of the total market share across the world has been taken over by this operating system. Also, another platform that has shown improvements is Windows Phone which has grown by a considerable amount in a year.

81 percent of the total smartphones shipped in the third quarter of 2013 were based on Android. The number of units stands at 211.6 million. In spite of the market being saturated, the world has seen a 39.9 percent growth year over year. Microsoft’s Windows Phone does not have much of a presence compared to Android as it lays claim over merely 5 percent of the market share. 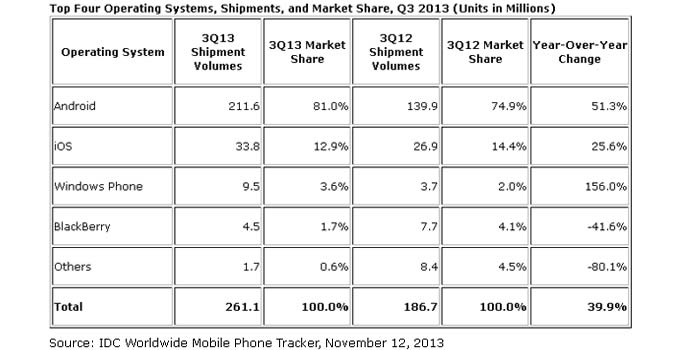 Nevertheless, the WP OS has grown by 156 percent in this quarter compared to this time last year. It had shipped merely 3.7 million units in Q3 2012. Apart from Microsoft, Nokia is to be thanked for its efforts to bring the platform to various markets for different prices.

Another thing that has come to light is that the average selling prices of the phone has declined by 12.5 percent and the average price has fallen to $317. There has also been a steep rise in the number of phablets being sold around the globe and their presence have increased from 3 percent a year ago to 21 percent in the third quarter of 2013. The average price for phablets is $443 though.

The Android segment is mainly dominated by Samsung which has taken over 39.9 percent share. Also, the reason behind Apple’s failure in increasing its presence is said to be the absence of a big screen smartphone.