Bharti Airtel already offers 4G services in its Punjab telecom circle, though it’s only now that this facility has been extended to Amritsar, Hoshiarpur, Kapurthala and Phagwara. If you remember, the company rolled out 4G in Chandigarh, Mohali and Panchkula in March 2013. It was in May this year that Jalandhar and Ludhiana got the same treatment.

The four new towns that have been added to the list of areas in Punjab that get Airtel 4G brings the total number to nine. Theoretically, customers should be able to watch high definition online videos without waiting for them to get buffered or download 10 movies in 30 minutes or less, at the speed that this next generation telecom technology delivers. 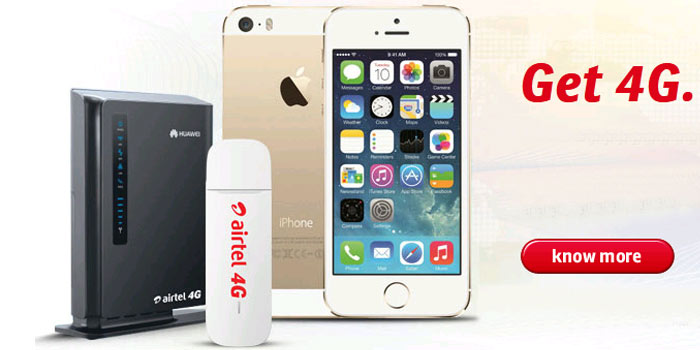 It goes without saying that in order to take advantage of Airtel’s 4G services, users will need to arm themselves with suitable devices. The Hindu notes that those living in the aforesaid areas in Punjab will be able to access the speedy network via dongles or Wi-Fi modems on the Xolo LT 900, LG G2 D802T, Apple iPhone 5S as well as iPhone 5C.

Those with the Apple smartphones we’ve mentioned above will need to swap their existing SIM card for a USIM (Universal SIM) or 4G SIM. If you buy a dongle for Rs 1500 and or modem at Rs 2500, Airtel will throw in a free USIM which would otherwise cost Rs 49. Prepaid and postpaid users on mobile can look forward to accessing 10GB of 4G data starting at Rs 995 and Rs 999, respectively.

These sound pretty good as promotional rates though we’ll need a lot of convincing to switch to Airtel 4G services considering how temperamental and expensive its 3G data is.