Google is celebrating the 94th birth anniversary of Dr. Verghese Kurien by honoring him with a special Doodle on its India homepage. Popularly known as the ‘Father of the White Revolution’, he founded the Amul cooperative society and transformed the dairy industry in India.

The Doodle depicts Verghese sitting on a stool with a milk can next to a buffalo. A rope seen on the ground spells the word Google. In a blog post, the tech giant explained why it chose to honor him today. It believes there are few things a person can give to their country as sacred and priceless as nourishment and Kurien’s dedication revolutionized the milk sector in India. 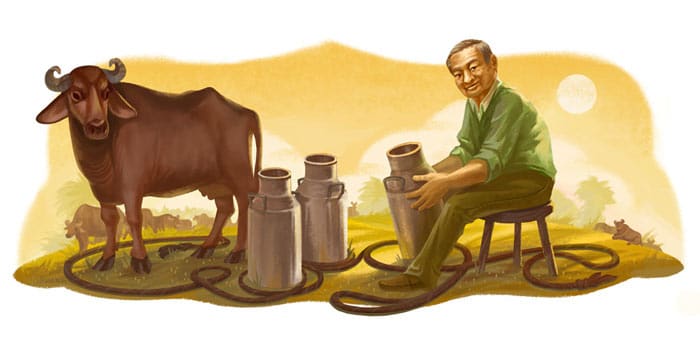 Verghese Kurien was born on November 26 1921 at Kozhikode, Kerala. The date is officially celebrated as National Milk Day by the National Dairy Development Board (NDDB) and Indian Dairy Association (IDA), in addition to 22 state-level milk organizations including Kurien’s own Gujarat Co-operative Milk Marketing Federation (GCMMF).

He was involved in the creation of around 30 other institutions such as the IRMA (Institute of Rural Management Anand). He was instrumental in the process of developing Operation Flood during the 1970s, one of the largest rural development programmes ever undertaken. The initiative put a National Milk Grid into place, connecting milk producers directly with consumers across India.

Kurien’s efforts resulted in India becoming the world’s largest producer of milk in 1998. He also paved the way for the innovation of producing skim milk powder and condensed milk sourced from buffalos, a method invented by H.M. Dalaya. The creation led to the establishment of Amul on a commercial scale, which is perhaps why Google chose to depict a buffalo in the illustration and not a cow.

Dr. Verghese Kurien passed away on September 9 2012 at the age of 90. He was honored with many awards during his lifetime such as the Padma Bhushan and Padma Shri.