The Cyanogen OS-equipped Yu Yureka smartphone is about to get a successor, and it makes sense that the company now wants to clear out its stocks to make way for the new device. This Wednesday and Thursday – May 6 and May 7 – you’ll be able to snap up the Rs 8999 device through Amazon without registering for it and going through its much crowded flash sales.

Micromax-run Yu Televentures has disclosed this news through its social channels, while Amazon has said that the open sale will commence at 10am on May 6. The Yu Yureka is about to be succeeded by the Yu Yuphoria smartphone which will be announced on May 12. 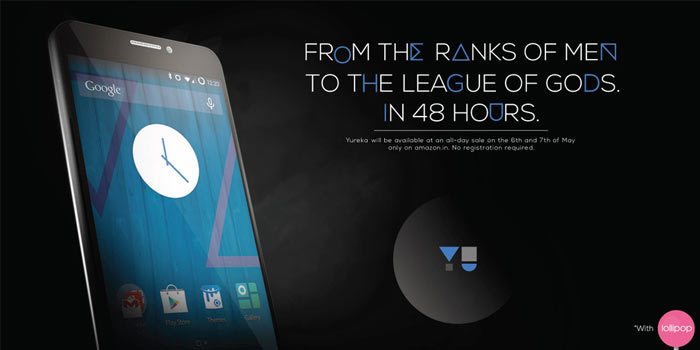 A competitor to the Redmi 2 from Xiaomi, this upcoming 4G device has been revealed to feature 2GB worth of RAM and a 64-bit processor. The new Yu handset will of course run the Android 5.0 Lollipop-based Cyanogen 12 OS, while it’s said to offer 16GB worth of default storage.

Here’s a quick glance at the specs of the Yu Yureka:

The Yureka smartphone too kicks in a 16GB ROM, apart from 2GB of RAM. It satisfies the photography needs of its buyers with a 13MP rear snapper and a 5MP front camera. Furthermore, there’s a 5.5-inch 720p HD display resting on top of it.

Also Read: Yu Yureka had yet another flash sale today

The flash sales of the Yu Yureka have been leading to the device going out of stock in seconds ever since it has been made available in India. And now, it is for the first time that it will be made available without any registrations; so let us see how things go for the smartphone.