Xiaomi entered the Indian market in July 2014, and managed to quickly alter it such a way that it eventually forced local players to completely rethink their strategies. High-end components at unbelievably cheap prices were offered by the company upon its arrival, which is why it’s no surprise that its entry into the country was the sixth most talked about topic in India on Facebook this year.

Xiaomi is known for its unique approach towards selling its products, which is also one of the reasons its arrival was met with so much attention. According to the social network’s annual ‘Year in Review’ readings, the most intriguing about topic on Facebook was the 2014 general election, and it was followed by the IPL, the World Cup, the Mars Orbiter Mission and the Kashmir floods. 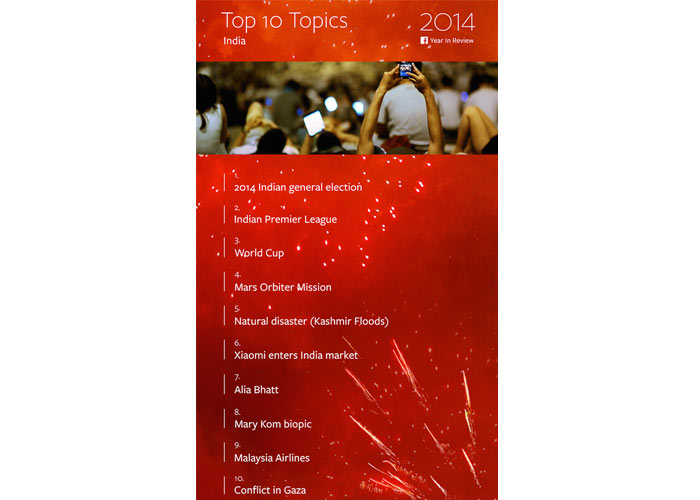 At sixth place comes Xiaomi’s arrival in India, with this topic having beaten Alia Bhatt, the Mary Kom biopic, the lost Malaysian Airlines flight as well as the Gaza conflict. The Chinese company does not believe in traditional advertising, and does not even have a budget for it. It does all its promotions using social media channels and other new-age methods.

It keeps its products in the market for a very long time than others in order to spin profits from them, since it’s hard to do that in a short time owing to their extremely low prices. Upon its arrival, it showcased three smartphones in the form of the Mi 3, the Redmi 1S and the Redmi Note, and has managed to infuse the market with all three of them before the end of the year.

Following the launch in July, the company’s popularity quickly towered a great deal which was evident through its flash sales that led its devices to go out of stock in seconds after them being made available for purchase. For its sales, it relies upon an exclusivity partnership with Flipkart, and the site is currently selling both the Redmi 1S and the Redmi Note smartphones.

With such an influence after just months of its arrival in the nation, Xiaomi seems to have made India a permanent base which is great news for the company as well as its fans.