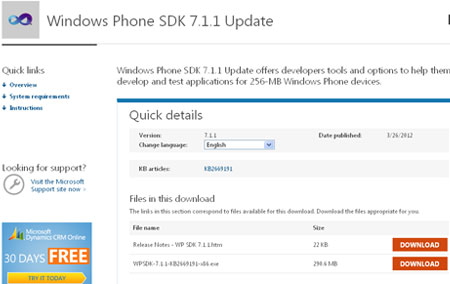 The new Windows Phone SDK version 7.1.1 is now ready for developers to download. This update is said to be the final edition of the CTP that was released last month by Microsoft. Among several other specifications, it will enable users to develop apps for new 256MB devices.

The applications created using this latest software are expected to work pretty well with 256MB devices. Apart from this, it should also allow users to employ the WPSDK 7.1 for the purpose of development for gadgets running Windows 8. With the Visual Studio IDE patched, the system will now permit selection and launch from a list of emulators.

“Installing the patch is pretty straightforward process, with a standard three-step install process (accept; install; finish). Because the patch contains two virtual OS images (256MB device image; 512MB device image), the patch is pretty beefy (weighing in at just under 300MB) and it can take time to install as it initializes each image as part of the installation. During the virtual image initialization process, each Windows Phone OS device image is booted up and then paused at the point where the OS is ready to accept an app install; while the initialization process adds some pain up front, it saves you lots of time in the long-run as you don’t have to watch the OS boot-up screen every time you start up the emulator to deploy/debug your code,” explained a post on the official Windows Phone Developer blog. 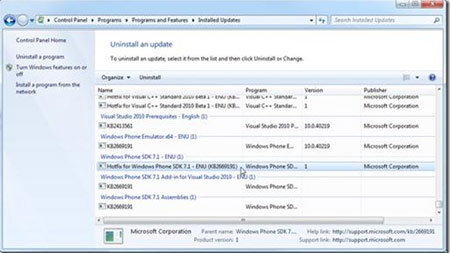 Furthermore, the company has updated the Microsoft Advertising SDK as well. Apparently, this revamp is meant to fix certain issues that developers were said to have been experiencing at runtime. Although the WPSDK 7.1 now seems ready to work on Windows 8, Microsoft is clear on the fact that it won’t be accommodated until we see the RTM launch of the OS.

The Windows Phone SDK7.1.1 can now be downloaded from the Microsoft website.