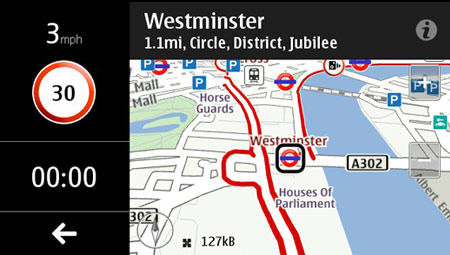 The official Nokia blog unveiled the Nokia Maps v3.08 app, an update to version 3.07. The latest edition of the app splits into parts on the screen and claims that its users will get to their destinations in a faster and easier manner.

Almost the entire layout of the app has been changed and it now features bigger buttons for convenient usage. There are three sections namely Drive, General and Maps & Walk. The icons are visible in a shade of green with rounded edges. Set destination, Just drive and Drive home are the three buttons users will see on the screen when they select the Drive option. On tapping the first button, users can view an option to select an address from their contacts.

In the earlier version users could not delete previously searched addresses which resulted in them piling up and looking cluttered on screen. However Nokia Maps v3.08 eliminates this problem as users can long press on an earlier search and then click on the delete pop-up which appears.

The app has, by default, a live traffic routing feature which provides users with the most convenient path and gives them constant information about the traffic, saving them from traffic jams. A tap on the options key will present users with a variety of buttons which perform functions like increasing the volume, changing the view to 3D or setting a destination.

There is a new information bar on the Drive navigation and Drive assistance screens too. The web version of the Nokia Maps application in beta also works on non-Nokia devices such as some Android phones and the iPhone 4.