Twitter is thinking about dropping its very limiting 140-character quota for tweets in an effort to build a larger audience, says a new report. It might come in the form of a product announcement or some changes to the way in which the elements of a tweet add up to the final character count. If the company is indeed planning such a move, it will put an end to all those valid complaints about the cap on tweet lengths.

While Twitter has yet to officially comment on the matter, several sources are apparently familiar with it already. According to the story, the idea has been doing the rounds internally for years. Executives are rumored to have been discussing the possibility of allowing longer tweets by not including links and user names in the 140-character count. The hope is that the site might shape up more appropriately into the micro-blogging service it’s supposed to be instead of a place to shout out 140-word headlines or declarations. 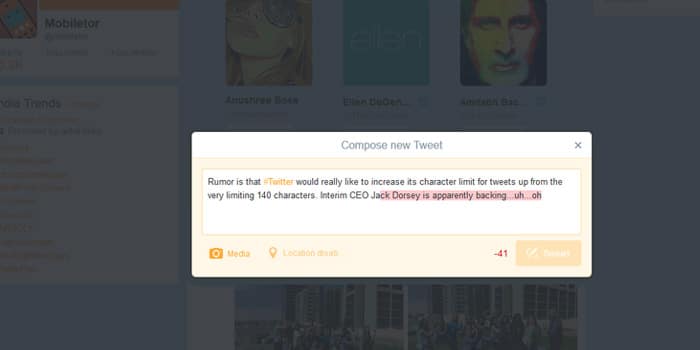 According to a post on Re/code, interim CEO of Twitter, none other than co-founder Jack Dorsey, is claimed to be supportive of such a move. The major hurdle the service will have to face comes in the form of longtime fans who resent tweaks to how it functions. If you recall the scandalized reactions to ‘favorited’ tweets being shown as retweets by default, Highlights and Instant Timelines, you’ll know what we mean. But investors in the company are baying for a healthily growing user base.

So far, Twitter has upped the character cap on Direct Messages to 10000, and a ‘retweet with comment’ option is also available to folks. Even if the social network of sorts does ditch its 140-character limit for tweets, it’s still got a long way to go before it can hope to take the fight to Facebook.