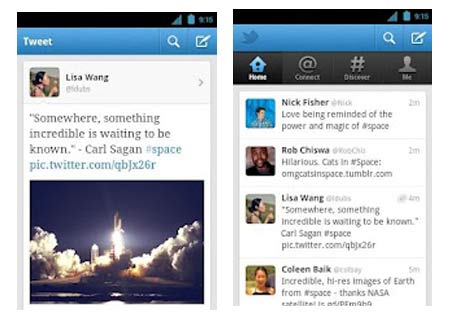 Recently, a Twitter app had been released for the Windows Phone 7 platform. Now, the official Twitter blog elucidates that the company has upgraded its Twitter for Android. Packed with some fresh enhancements, the company claims that it will proffer a more steady experience.

Some of the additions include the Tweet details page which has been introduced by changing out the layout of the timeline. This functionality is already present in the iPhone, iPad and Windows Phone versions. It could be accessed by simply clicking on any tweet making it effortless to access links, retweet, reply to, or favorite a Tweet.

The app has been improved to function faster. A new way of drawing a timeline of Tweets has been added to augment the scrolling speed. Another functionality that was earlier present in the iPhone app has now been added which lets users pull down the timeline to load new Tweets. By swiping across a tweet, handset owners can access several options like the ability to view a user’s profile, reply or share a tweet.

In addition to the above the upgraded app will proffer hi-resolution avatar photos and quote a Tweet. On clicking the retweet icon, users will notice a new option to quote a Tweet. The latest upgrade can now be downloaded from the Android Market. It is compatible with Android 2.1 and higher.