Just for some laughs, you may like the Bing-powered translation tool Twitter is aiming at those who wish to read content that is not tweeted in a language they understand. The idea towards which the social networking and micro-blogging site has displayed a non-committal attitude until now, has been rolled out for iOS, Android, web and TweetDeck.

But machine translation is never going to be as good as you want it to be, no matter how much you believe in the possibility of the Great Automatic Grammatizator being built someday in the future. As you can see from the image posted below, the Bing tool translates tweets in a rudimentary manner and barely captures the essence of the content. 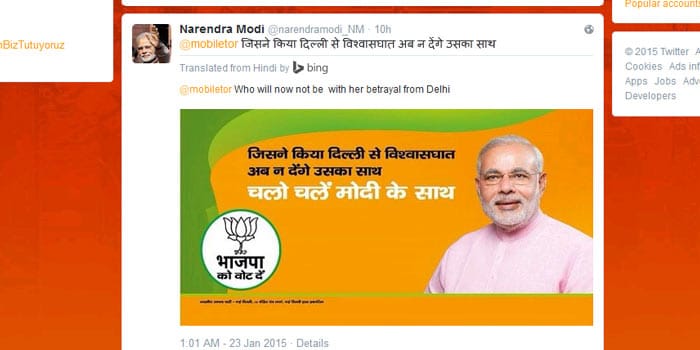 However, if you must glance at Twitter content in a language other than your own, you can do so on mobile and desktop without breaking a sweat anymore. Simply ensure that the feature is enabled in your account’s settings before wondering why you can’t see it. Now whenever you view a tweet that is not in a tongue you understand, a globe icon will appear next to it, on the upper right side.

The Bing translation service will kick in when it detects that tweets are showing up in any other language but the one in which you’re using Twitter. The original tweet is still displayed above the translated one. Microsoft’s tool interprets content between 40 language pairs or so. The end results will obviously vary and be less accurate and fluent when compared to the services of a professional, human translator.

What do you think about Twitter’s new Bing translator tool for its tweets? Have you ever felt the need for a feature such as this one?