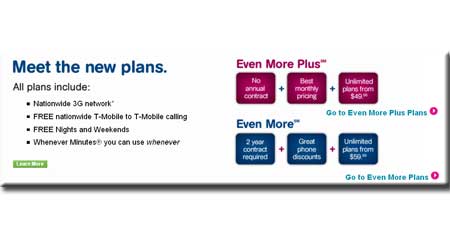 The earlier rumored T-Mobile Project Dark that spoke about new price plans is finally official. Well, the two new plans announced by T-Mobile are called the Even More and the Even More Plus, reports Engadget. Both these price plans are targeted towards consumers on the look out for heavy upfront subsidies on a non-contract plan.

The T-Mobile Even More offers users a traditional device subsidy along with a two year agreement. The Even More Plus eliminates both the device subsidy and the contract. However, both plans provide users with an option to upgrade through the tariff levels to an unlimited voice/message/data package.

The T-Mobile Even More price plan kicks off at a modest $59 and goes up to $99. While, the Even More Plus eliminates the device discount but offers unlimited individual prices at $49 for voice or at $79 for everything.