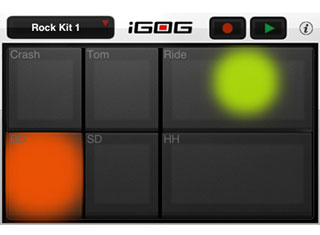 Wave Machines Labs has come up with an interesting application for the iPhone called the iGOG VelAUcity. According to Engadget iMobile, this application provides iPhone users with velocity-sensitive drum pads.

Although the glass screen of the iPhone is not pressure sensitive, this application provides users with drums that are velocity-sensitive. The company has refrained from commenting as to how this app manages to get response from a device that’s supposedly not pressure-sensitive. But it is speculated that the app uses the built-in mic during operation.

Most of the applications that work with the iPhone are also compatible with the iPod Touch. But the highlight of the iGOG VelAUcity is that the app is not compatible with the iPod Touch. Well, this all the more confirms that the trick lies in the built-in mic. Reportedly, the multiple hit points on the drum pads and the velocity sensitivity are pretty good. The website requests users to use the app with their headphones on.

Well, the Wave Machines Labs’ iGOG VelAUcity drums surely provide users a way to display their creativity. This iPhone app is available for a nominal fee of $5.