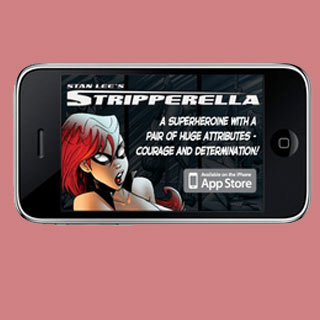 Renowned comic book creator Stan Lee teams up with Universal Uclick, leading distributor of comics to announce the latest version of one of his most exciting comics, Stripperella. The super-heroine features in an original four-volume comic book series scripted by Lee with art by Anthony Winn.

Exotica Jones, the latest manifestation of the motorcycle-riding exotic dancer who fights crime as Stripperella, makes her debut in this innovative mobile comic book series on the iPhone.

“Stripperella is an eye-catching super heroine, and comic fans will appreciate that Stan Lee, master comics craftsman that he is, has injected this series with a madcap spirit that makes it a thoroughly entertaining read. These mature-audiences series – available exclusively in the App Store – is uncommonly, unabashedly, undeniably fun. It’s exactly the kind of all-out entertainment fans have come to expect from the most well-known innovator in comics,” stated Universal Uclick President and Editor Lee Salem.

The superwoman’s fans will notice that POW! Entertainment has modernized the character’s original design that was portrayed during her cable television debut in 2003. Though she sports a new look, her tongue-in-cheek humor and ‘bombshell’ status that makes her stupendous, are unaltered.

Stripperella and other comic books, graphic novels and webcomics for the iPhone and iPod Touch are now available at the Apple App Store on the iPhone or on iTunes, or at StripperellaApp.com.